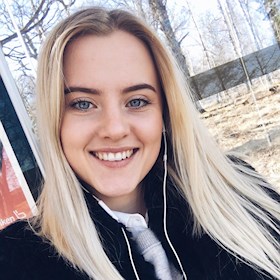 MatildaPJohansson
Matilda
Who knows, maybe today is our last day? What would you do if it actually was?

This very day, it was 11 years ago the twin towers in New York city fell to the ground. Can you believe it? I really can't. The thought of this horrific event reminds me of two things. Two important and pretty damn true things. First is, time passes by so fast. I feel like it was just like yesterday when my family and I were standing at the Brooklyn bridge watching the two enormous light poles which had the exact same location as the towers had before the attack. In general, history passes by super fast. The subject I'm discussing right now happened in modern time, while most of alive people today were in life. And it is history already. Isn't that insane? Imagine 100 years from now, in 2112, reading about the terror attacks at nine eleven as something old. It'll probably be seen like something unreal that might not even have happened since no living person will be able to tell our own story at that point. Because all of us will be gone by then. I remember last year this day. And even days and months before. I remember writing essays and having discussions about the event in school, in every single class. No wonders since the new yorkers have this close to their american heart. It's probably mandatory to bring it up in school, especially in America. As if the coming generation would walk around unknowingly otherwise. Well, that's just a thought. ”Never to be forgotten,” they say. They feel duty to remember what really happened and most people agree with this opinion while others partly och completely disagree. I remember talking to a girl in English class, who claimed that poeple should stop caring since it was such a long time ago by now. As if we are too farsighted. Too country-loving. I don't know if I would join her in her party but however, she gave me a different point of view. Which I like. People in general, average people, usually share opinion with the rest. We are go-with-the-flowers. So, I liked that girls point. Even though I believe that the facts about what happened at 9/11 should keep on being spoked about, and even though she acted a bit rude and had an over-all negative accent when she gave her opinion, I felt something new. It was fresh. Well, let's continue. The second thing I thought of is how precious life is. This day, 11 years ago, so many lives were lost. In addition, a huge number of people's lives got affected from this one little decision to crash into the twin towers. Before this, people were walking around looking on life like how it simply is. We get up in the morning, eat our cereal, get on the train, on the bus, on the bike...we make our way to wherever we are going and stay there for a couple of hours doing whatever we are doing until it's time to leave, we kiss and we hug and we go to sleep. And a whole bunch of other things of course. But that's not my point this time. My pint is that this day something changed. The pattern of thinking broke and suddenly life started to seem so much more precious. I think that is the one simple word to use. Life is precious. So let us take advantage of what we have. Every single week, day, hour, minute and second is time created for you to make the best of it. Because who knows, maybe today is our last day on this little place called earth? What would you do if it actually was?
Today will never come again. Be a blessing, be a friend. Encourage someone. Take time to care. Let your words heal, and not wound
sources text:my mind
pics: my camera & tumblr